How would you describe your approach to autism research?

My approach is related to what we call endophenotypes. That is, to define the various underlying medical conditions that are related to specific subsets of children with autism. The idea is that once such subsets are defined, we can better understand how to treat specific children in order to improve their lives.

You’re looking a great deal at connections between autism and mitochondrial disease and dysfunction. What are mitochondria? 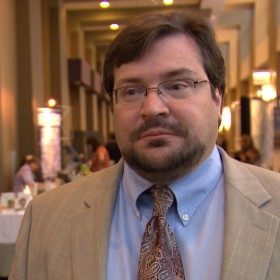 The mitochondrion is what we call an organelle; it’s a small substructure within each cell. Our cells have anywhere from several hundred to several thousand mitochondria. They’re mostly thought to be the powerhouse of the cell. That is, they make most of the energy that we need to fuel other systems in the cell with energy. However, they have other functions, too. They also regulate certain metabolic reactions. They are the major source of reactive oxygen species and when they are dysfunctional they have the potential to make too many reactive oxygen species and cause oxidative stress, a process that has the potential to damage the cell. They are important in the regulation of calcium, which is very important especially in nerve cells. They are also very important in something called apoptosis, also known as programmed cell death. So, if they become too dysfunctional, they can actually signal the cell to die. Classic mitochondrial disease is manifested by problems in the parts of the body that require lots of energy. Not all of our body uses lots of energy – for example, our skin cells use relatively less energy than our muscle, gut or brain cells which require a lot of energy. And so, in mitochondrial disease, we see these specific high energy systems affected. And interestingly, those are the same systems that we see affected in many children with autism.

The mitochondrion is a central player in many critical metabolic pathways. One of the critical issues that we are investigating is whether there’s what we call primary mitochondrial disease or secondary mitochondrial disease. That is, does the problem start with the mitochondria itself or does it start in another metabolic system that is dysfunctional and then cause secondary dysfunction of the mitochondrion. Either way it is possible that the mitochondrion might be the final common pathway that causes many of the problems we see in children with autism. This is very important as this can be the common final pathway that results in the physiological abnormalities that cause autism. This is significant as it points to specific treatments and interventions that can improve children’s lives and, if these abnormalities are detected early enough in life, it may be possible to prevent the downhill course in development that we see in some children with autism.

Your most recent findings were that mitochondrial dysfunction/disorders were found in a significant portion of ASD patients. Tell me a bit about that.

Does your work relate to the work of Dr. MacFabe?

Dr. MacFabe has some very interesting work, and he’s shown that when you inject proprionic acid into the brain of a rat, the rat looks autistic. He’s made some very interesting discoveries as far as why that is happening and a number of things seem to parallel what I’m seeing in children with autism. That is, he’s finding specific patterns of biomarker abnormalities of mitochondrial dysfunction in rats that we are seeing in children with autism and mitochondrial disease. The pattern is rather unique, so the findings are rather compelling. So, it may be that we’re actually finding a new sub-set of these children with autism that have dysfunctional mitochondria that may be secondary to some of the same metabolic processes that are abnormal in the rats. There may also be other pathways that are dysfunctional too, but there appears to be prominent involvement of the mitochondria. By using Dr. MacFabe’s rat model, we can understand why the mitochondria and the other systems aren’t working and what we can do to treat and prevent such dysfunction in the future.

Does any of your work relate to the research being done around gut bacteria?

I think there are some interesting parallels and interesting hypotheses that have been generated. And really, now it’s the time to go out and really carefully study these hypotheses to find out if we’re on the right track or not, and that’s going to take some careful studies paralleling animal models with children to see if there’s the same type of abnormalities. As I had mentioned, we see some of the same biomarkers, but we need to see if there are other physiological abnormalities involved in both the animal model and the children with autism. Also, if we find a way to treat these abnormalities in the rat we can see if these treatments also help children with autism. The next step is to really see, how we prevent the rats from developing these mitochondrial abnormalities. And then, possibly try that in children. One of the ways that Dr. MacFabe has proposed this is treating with a vitamin called carnitine. Carnitine is a vitamin that helps with the transport and metabolism of fatty acids. We find that many children with autism have low levels of carnitine. So, that’s kind of a compelling connection. And we know that giving carnitine seems to improve function in some children with autism. So, it may be as simple as just manipulating the metabolic pathways to make them work more efficient with pretty innocuous co-factors and vitamins.