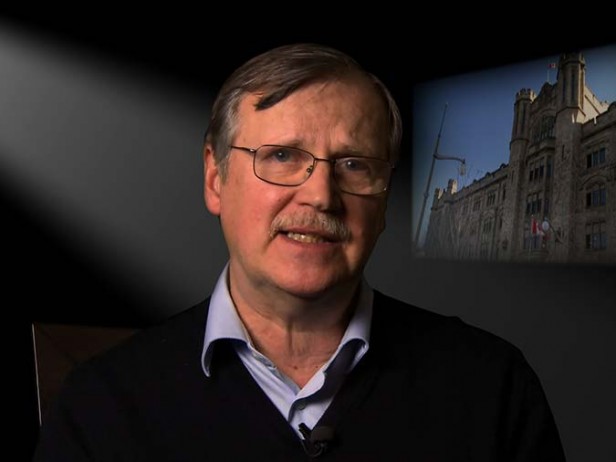 Dennis Howlett is the Executive Director of Canadians for Tax Fairness which is campaigning for fairer taxes to fund the comprehensive, high-quality public services and programs required to meet social, economic and environmental needs in the 21st century. He lives in Ottawa.

BENGER: Talk about the launch of Canadians for tax fairness back in Feb 2012.

HOWLETT: Well, that was our Fair Tax Summit and it was really our attempt to come out publically, to get the tax issue discussed from a different perspective — from the perspective that taxes are good, taxes enable us to do a whole lot of good things in society.

And for too long we’ve been sold a bill of goods tax cuts, which really have delivered more pain and hardship and a falling quality of social programs and economic problems as well.

BENGER: My takeaway from that was all the grey hairs in the room.

HOWLETT: We did try hard to get some younger people as well. I think we are finding there is interest in this issue on university campuses, for example. We do have some volunteers interns, graduate students doing research for us so it is finding support right across the board.

BENGER: Bob Rae’s message was you can’t get elected in Canada making the rich pay.

HOWLETT: I think that used to be the case but I do think that’s changing. The public opinion poles we’ve done recently show growing public support and willingness to pay more taxes if that can avoid painful cuts in government programs, and ensure the quality of education, health, things that are important to people.

So I think that’s an old story. The new story is that the cutbacks have gone too far, people are seeing that there are problems, and they would prefer to pay a little bit because if you can get good quality programs in return, that’s the key.

BENGER: What about the Harper government and Jim Flaherty in particular?

HOWLETT: The tax havens campaign that we undertook starting in the fall of 2012, we felt that the tax havens issue was the one issue we might get somewhere with the conservative government. They’re obviously ideologically opposed to raising taxes but they’re in a bind.

They are not gonna meet their deficit reduction targets, the economy is just too weak. They had very deep cutbacks on austerity budget in 2012. It made a major damage to the recovery. It probably reduced our GDP by almost 1 per cent.

So they realised they couldn’t cut much deeper or it would really push the Canadian economy back into a recession, and that would lower tax revenues and they’d be worse off. So they don’t want to raise taxes, they realise they can’t cut too much more, so the only option they have is to look at tax fairness and going after tax cheats using tax havens and closing some of the loop holes.

So in the 2013 federal budget they actually took a few steps to do something about tax havens and tax fairness. I was really surprised. When I went in to the budget lockup — they allow people to go in and see the budget before it gets announced — it was a whole chapter on tax fairness.

And I thought, wow, you know, we’re actually having some impact already. Now, they didn’t go far enough but at least, you know, there are a few steps they did take in the right direction.

BENGER: The Godsoe Panel’s conclusions were basically that you shouldn’t fetter Canadian businesses at all, regarding Canada’s competitive tax situation. So if that’s the policy – hands off of the international tax regime – how can the government say they’re taking steps against tax havens?

And Canada is one of the countries that is resisting this. We’ve heard Canada and Japan are the problems. And it is a problem because the G8 is a consensus document usually. If not all countries agree, at least to go along, then it puts a kibosh on important actions.

BENGER: By the time this film appears the G8 Summit will be water under the bridge.

HOWLETT: We know that Canada is a laggard on taking action on tax havens but I’m hoping that peer pressure from other countries– and Prime Minister Cameron is a friend of Prime Minister Harper. So we’re hoping the combination of their desperate straights to reduce the deficit, the peer pressure from other countries to do something, and the growing public awareness and popular pressure will combine to actually make this government take action.

HOWLETT: The Canadian Finance Committee did have hearings on tax havens, that’s a good thing. And initially when they ask the banks to appear to ask, to answer questions, the banks refused. And they just send the Canadian Bankers’ Association, which is sort of their lobby group, but those reps couldn’t really answer the questions that the MPs had.

So as a result of that, there was an agreement to add another day of the hearings and actually make another effort to get the banks to appear. But when the banks did appear before the Finance Committee, they were let off — pretty mild questioning compared with the kinds of grillings that you see in the US congress or in the British House of Commons.

And even though I’m prepared to believe the Canadian bank executives when they say their banks in Canada are not breaking the law, I don’t… They answered in a very slippery way as to whether their subsidiaries in the tax haven countries are following the Canadian bank’s protocols around, for example, establishing who is the real beneficial owner of an account?

BENGER: There’s a lack of Canadian companies that you have identified as involved in this activity you haven’t been able to get people out on the streets, or are you having difficulty?

HOWLETT: Well, in Canada, it’s been very difficult to get information on Canadian corporations who are avoiding paying a fair share of taxes. There just isn’t very much public sources of information available on this. And so far, not many whistle blowers have come forward to expose some of the Canadian companies involved.

We have some information we’ve been able to get from sources who are not yet prepared to be public so we know that Canadian corporations are doing similar things to what the American and British companies are doing in terms of avoiding paying taxes.

But it is a way to funnel a whole lot of profit offshore where they don’t have to pay taxes on it. So that is going on and I actually know of that but I can’t speak about it yet because my sources aren’t prepared to go public on that.

BENGER: I was in Grand Cayman and they call it Grand Canada.

HOWLETT: A quarter of all Canadian direct foreign investment, money from Canada being invested abroad, a quarter of it is going to tax havens down there. And you can bet you, it’s not going to, maybe a little bit of it is going to buy a resort in Barbados or something, but most of it is going there to avoid taxes, and going on to other places where they can hide where the real money is.

So it’s a big problem. It’s a growing problem. $170 billion — that’s 10 per cent of the Canadian economy. I mean, we’re talking a huge amount of money here. And it’s just, it’s not just a little side issue anymore, it’s a major problem in terms of how our economy functions, how much tax revenue the Canadian government is able to get.

BENGER: The UK and the US IRS are much more pro active. The Canadian government is saying there is more money for international tax avoidance yet they’re also cutting back. What is happening at the CRA?

And I know from talking to Canada Revenue Agency staff that they are severely under-staffed, they don’t have time even to open up some of the files of information they get from other governments through the tax information sharing agreements.

And the government did, as a result of all the pressure that we and the media have put on them, they did announce the creation of a new unit to tackle tax havens, but they announced only 6 or 10 staff were gonna be in this unit. I mean, this is a joke.

There needs to be far more resources put to this. Other countries are way far ahead of Canada in terms of going after tax cheats. The OECD just downgraded the Canadian Tax Collection Authority to a much lower level than it used to be.

So compared with other countries, we are really falling behind in terms of going after tax cheats. And this is a problem because our tax system relies on voluntary compliance. But that voluntary compliance only works if people think that the tax system is fair, that everybody has to pay their fair share of taxes, and that we get something, quality services in return, and that if you don’t report your income properly, there is a chance you might get caught.

BENGER: If the government has dodged the bullet after the OECD how would they have pulled it off? But at the same time, you know, there are some Conservative members of parliament and even Conservative supporters who feel that this whole tax haven scheme has gone too far.

HOWLETT: Traditional conservatives do believe in the rule of law and do believe that, you know, things should be fair and so on. And so there is some pressure, even from their base, to do something about this, to make the system fair.

One thought on “Dennis Howlett”