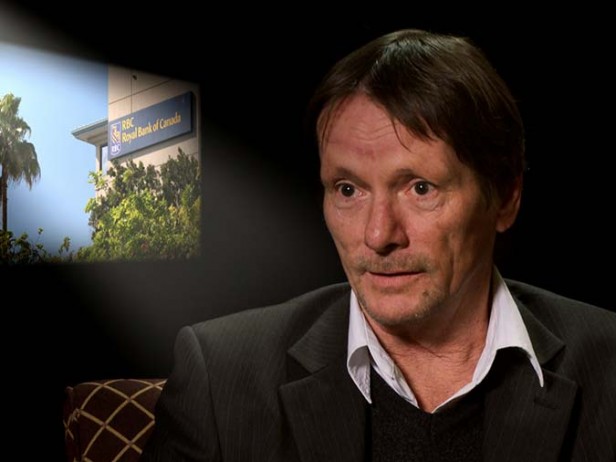 Peter Gillespie is Program Director at the Halifax Initiative and is a Director of Canadians for Tax Fairness.

BENGER: What about the origins of tax havens?

GILLESPIE: I’ve been looking at the origins of money laundering, which is very much related of course to tax havens, and I’ve gone back to the prohibition era back in the 1920s. And actually, money laundering has a, is linked to a rather disreputable period in Canadian history when we were the bootleggers of cheap Canadian rye and whiskey to a whole host of gangs in the United States, which eventually of course became the syndicate of the United states.

All of these gangs started off operating independently. They were, there were Jewish gangs, Irish gangs, etc, and they basically had their own territories. But it was really prohibition and the, the experience of beginning to collaborate together that formed the syndicate in the United States.

But what, what happened in the early 1930s was Chicago’s Al Capone was successfully convicted for tax evasion, which was a real wake up call for monsters. You know, you, there was so much money being earned that it was no longer possible to launder it through car washes or Laundromats so they had to find new ways of laundering money and washing it clean so that it could be used for legitimate purposes.

And so what happened was a, was a very famous gangster by the name of Meyer Lansky, who was based in New York, who was a very, very clever man, made his first foray into Swiss banking in the early 1930s. And he invented what is now, what is called “the loan back” technique.

So money would be shifted to secret bank accounts in Switzerland but then it would be loaned back to the person who had started the cycle in the United States, and — as a loan, with interest — and that person would pay the interest and declare that interest as a legitimate business expense. And then the money was invested in legitimate, licit types of activities, whether it was restaurants or real estate or whatever.

And this loan-back technique is even used today actually by multinational corporations to basically reduce their tax obligations.

GILLESPIE: Although the gangsters have now been replaced by the big major accounting firms and a whole infrastructure of bankers and accountants and whatnot. So the gangers have, are no longer in the picture but that really was, in American terms, that really was the origins of money laundering in North America.

BENGER: What are they doing down there, and how does it work?

GILLESPIE: In 2002 there were several groups, Canadian groups, who actually challenged the banks to examine the banks shareholders to examine whether Canadian banks should remain in the Caribbean tax havens given the notoriety of these tax havens, and asked the banks’ shareholders to have a discussion and actually vote on whether these Canadian subsidiaries in the Caribbean should be pulled out.

And all of the banks pleaded innocent and none of them, of course, removed their subsidiaries from the Caribbean. Some of Canadian, some Canadian banks have been involved and have been fined for illegitimate activity in the Caribbean, that’s for sure. And Canadian banks were both fined and censored around the Enron Scandal in the United States as well.

BENGER: A lot of publicity about tax avoidance elsewhere but there are stunning statistics in Canada, so my question how much money involved in Canada?

GILLESPIE: The problem in Canada is that we do not have a robust independent research capacity like has developed, for example, in the United States or the United Kingdom. So our information is… we don’t have a lot of information. What we do know, for example, that Canadian companies and banks are enormous investors in tax havens, in financial offshore financial centres. And that’s been increasing over the last 15 years at quite a rate.

We do have research out of the University of Quebec at Montreal that suggests that the five major Canadian banks have avoided about $16 billion of federal and provincial taxes during the 11-year period where that research was conducted on.

Revenue Canada is notoriously secretive. Canada does not, unlike many other countries, does not announce the tax gap — the difference between what government expects to receive in tax revenues and what it actually receives. Very unlike, for example, the United States or Sweden who do every year announce the discrepancy in tax revenues.

So we need to build an independent research capacity in Canada, but in 2002 the Auditor General of Canada warned that hundreds of millions of dollars were in potential corporate tax revenues had gone missing because of corporate investments in tax havens. But we don’t have a good information or database, which is very unfortunate.

BENGER: How would you explain tax avoidance to the average Canadian?

GILLESPIE: I think any public discussion has to be two-fold. One, it has to be based on the facts, and so we need to explain to Canadians what the facts are. And the facts are that there’s an enormous capacity in Canada and in industrialised countries for wealthy citizens and corporate enterprises to evade taxes. And so that’s the facts side.

I also think that we also have to reinforce why taxes are so important. Taxes pay for our hospitals, taxes pay for our, for our old age support systems, they pay for all of the common good that we expect as citizens of this country. And it’s, it’s the social contract.

I mean, the relationship between citizens and their government is very much lodged in tax policy. And if Canadians believe that our tax system is faire and equitable, and that everybody is paying their fare share — in other words, a progressive tax system — I think Canadians, and I think the polls show this, I think Canadians are very supportive of paying taxes.

I really fundamentally believe that the current government is out of step, quite substantially with, with the majority of what Canadians believe and think about the value of taxes in the common, the, the common goods and services that we all receive from, from our taxes.

BENGER: Wouldn’t they be astonished that major Canadian brands pay no taxes?

GILLEPIE: I think they probably would be. And that is why our job as, as social justice activists, has to be to get that information out into the public realm and to begin to counter the political rhetoric that is coming from right-wing think tanks, that is coming from our conservative politicians. So we have to counter that with a narrative of our own.

I think it’s either Sweden or Denmark that actually publishes what each citizen pays in tax. Publishes it. It’s public information. So I think the privacy rights of Canadians, of citizens, only goes so far.