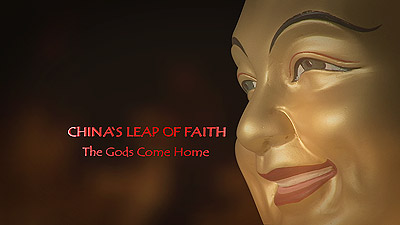 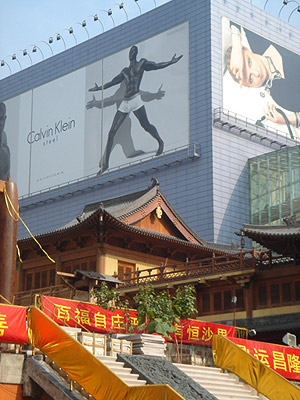 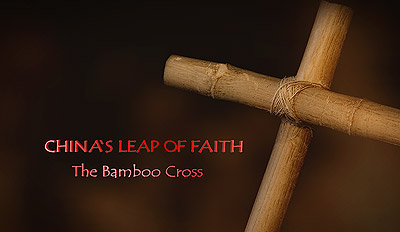 China, the world’s most populous country, a booming new economic superpower. And now, after decades of official atheism, religious fervor is exploding in China, unleashed by a government reforms.

Part One: The Gods Come Home
The Gods Come Home reveals the rebirth of the indigenous faiths of Buddhism, Confucianism and Taoism, and the revival of the local “folk religions” that govern village life. The government is wary of the power of religion, and is trying to both control and exploit this resurgence at the same time.

Part Two: The Bamboo Cross
Christianity is growing faster in China than anywhere else in the world. The Bamboo Cross follows the stories of a cross-section of Chinese Christians, from migrant workers to Bishops to rebel pastors, who have to make a choice between worshipping openly or in the shadows. They live in an atmosphere where “unofficial” and “official” churches proliferate side by side, both vying for the souls of one million new Christians every year.

The Gods Come Home
Description:
The film opens with pilgrims flooding into a huge open-air festival at one of Buddhism1s holiest places – the Guanyin Temple on Putuo Island off China’s southern coast. The next stop is Shanghai, where 100 of the city’s 1000 Buddhist temples are being restored. There, we see the two poles of Chinese Buddhism – materialistic and anti-materialistic temples and their keepers. In Fuzhuo Province, in the south, the old gods are being revived: ancient rituals fusing witchcraft and faith healing, all bound up in traditional ancestor worship.

In Hong Kong, one of China’s new class of powerful businessmen, explains that Buddhism and business are compatible, as long as the philosophy is respected. And a Buddhist monk and academic worries that the government is harnessing of religion to politics to use Buddhism for it’s own purposes, and in doing so is turning sacred sites into religious theme parks.

Meanwhile, in Beijing the government minister in charge of regulating religion has his own concerns – that religious activities don’t spill over into the political arena, as has happened lately with Tibetan Buddhism, and with the Falun Gong in the past.

On a return to Putuo Island, the film concludes with a visit to a grandfather who kept his Buddhist faith alive by praying at an altar hidden in the back of his house all through the dark years of repression. He shows us that no matter what governments try to do to control it, for countless Chinese, spirituality is something that comes naturally from deep inside and cannot be eradicated.

Cast of characters:
Mrs. Zhuo: A 70-year-old retired civil servant in poor health makes a pilgimmage to Mt. Putuo to seek the blessings of Guanyin, a Buddhist goddess, and to improve her karma.

Master Zhan Hui: a young novice monk living a life of devotion in one of Shanghai1s poorer temples.

Abbot Jue Xin: presides over the Jade Buddha Temple in Shanghai, one of China’s wealthier temples. He’s also Vice President of the Buddhist Association of China.

Ye Xiao Wen, Minister of Religion: Minister Ye points out that government policy now puts religion as a high priority. He is riding a tiger – liberalizing religion while asserting control at the same time.

Bao Zhu Lin and Zen Quan: farmers in Fujian Province. They live next door to a “lineage hall”, where the gods are neither Buddhist nor government recognized, but are deeply rooted in local beliefs.

Professor Lin Guo Ping: A world expert on popular Chinese religion. He takes us on a tour of lineage hall temples.

Liu Chang Le: Owns Phoenix TV, a global Chinese satellite network. A Buddhist and keen observer of the Chinese government1s efforts to harness the explosion of Buddhism and folk religions to it’s own political ends.

Dr. James Miller: Professor of Chinese Religion at Queens University. He explains that, with the death of Communism as a belief system, the Chinese government has begun using religion to prop up it’s own support.

Master Li Hongzhi: Head of the Falun Gong, now in exile in the U.S. A rare, exclusive interview.

Zhang Ji Guo: A temple gatekeeper. A poor man left out of the prosperity of the new China, but rich in his Buddhist beliefs.

The Bamboo Cross
The film begins in Shanghai where we meet the most senior Catholic Bishop, then the head of the official Protestant Church, and learn of the bargain they made with the Communist government to re-establish and re-build their churches after the devastation of the Cultural Revolution. Shanghai is also trying to absorb and integrate millions of migrant workers. We meet one such migrant family who credit their Christian faith with their new-found success.

In the Western province of Sichuan, a simple villager has become her area’s first pastor of the official Protestant church. She has enlisted the help of a foreign Christian worker to find the funds to build a church. Local government officials are hoping her efforts will stave off the spread of unregulated and uncontrollable cults in this remote area.

In a gritty, industrial village near Beijing, the new Catholic priest is sitting on a religious powder-keg. His church is one of China’s holiest shrines, a magnet for pilgrimages that have been banned by the government.

In Beijing, a race is underway between the official and unofficial churches. The official Protestant church has embarked on an ambitious government-assisted building campaign to provide approved places of worship. Meanwhile, most Protestants are attending unregulated “house churches”. The house church pastors contend that the official church is offering a watered-down Christianity and vow to continue to spread their own version of the faith, outside government control, even at the risk of arrest.

Cast of characters:
Bishop Jin Luxian: Now Catholic Bishop of Shanghai, Jin was imprisoned for twenty-seven years during the worst years of religious suppression by Mao’s regime. His decision to cooperate with the government after his release has allowed him to build a strong, Chinese-run Catholic Church. Bai Wanfu and Wu Fengli, and their daughter Mingli: Migrants who moved off their land to find a better life in Shanghai, along with millions of others like them. As new Christians it seems their prayers have been answered. They now run their own small business, and thank God for their good fortune.

Reverend Cao: President of the official Protestant organization. Her job is to promote orthodoxy, champion the official church, and put the best face forward for state-sponsored religion.

Pastor Shi: In a remote part of Sichuan Province, this newly ordained country pastor has her finger in the religious dyke holding back the spread of heretical Christian sects. Local government officials are making sure she toes the line, but are also helping her to establish an official Protestant church.

Jeanette Hanson: A Canadian Mennonite from Saskatchewan, Hanson has lived with her family in China for the past fourteen years. She walks a delicate line – a foreigner doing what she can to help the growth of Christianity in a country where missionary work is illegal.

Pastor Zhang: Zhang is an unrepentant rebel who goes around the country visiting “underground” churches. His movements are monitored by the Religious Affairs Bureau and he’s been arrested fourteen times. He says he doesn’t care what they do to him, he’ll continue spreading the gospel his way.

Minster Ye: Ye is the Minister for Religious Affairs in the officially atheistic Chinese government. The “healthy growth” of religion is a government priority.

Father Lu: Lu has been handed a difficult assignment – try to unite above ground and underground Catholics in one of the country’s hottest religious hotspots, a shrine that is a magnet for pilgrims and a past scene of repression and arrests.

Reverend Yu: Yu leads a church-building program in Beijing, putting up official Protestant churches as fast as he can to counter the growing number of unofficial churches.

Reverend Ezra Jin: Jin represents the growing number of middle class, educated Protestants in Beijing. He left the official church to found his own, independent church. He predicts that his way, not Reverend Yu’s, is the way of the future for China’s Christians.

The Bamboo Cross weaves the stories of these characters into a portrait of contemporary Chinese Christianity, an atmosphere where “unofficial” and “official” churches proliferate side by side, with both claiming to be the future of the faith in China. It’s an age-old battle between God and Man, played out in a country with the potential to soon have the biggest Christian population in the world.